How to organise a meetup?

Organising a meetup is a great way to connect with like-minded people and exchange on topics you're passionate about. In this post I gathered some tips based on my experience organisation meetups in the last few years.

Probably the most tricky part of organising meetups, specially when you get started.

Make sure to leverage your network. Some of your friends, colleagues, Twitter followers may not have considered giving a talk before. Give them a chance!

If you struggle to find speakers, you can be creative and maybe ask a remote speaker to speak through Skype or similar. There are also other things you can do like hands-on sessions, lightning talks or discussion panels.

I also enjoyed giving under-represented people (students...) a platform to talk, to foster a culture of diversity. I even hard-coded this principle in the rule of conduct of the last meetup I organised.

If you're in London and your meetup aligns somehow with Mozilla mission and manifesto, why not hold it at Mozilla office? You'll need to have an employee to sponsor you and make the requests on your behalf.

For other places or other topics I unfortunately don't have much experience, but you can try to contact the venues where you have attended meetups in the past. Here again, use your network!

it's nice if possible to offer snacks and drinks to provide the attendees with the best experience possible.

I don't have much experience in finding sponsor but you can try to contact hiring companies in industries closely related to your meetup. They'll be happy to sponsor your event in exchange of a way to get in touch with local talents and potential users.

Another possibility depending on the number of attendees is to buy and bring snacks and drinks for yourself. Some big meetups don't offer such amenities so don't feel bad if you don't.

Do you need any specific Audio/Video support? Some venues can accommodate all sorts of A/V needs (recording, live streaming...). At the very least you'll need an internet connection and a monitor to show slides and demos. Make sure you know your needs and clear any assumptions with both the speakers and the venue beforehand.

When everything is ready, it's good to prepare a detailed plan. That will help on the day of your meetup to make sure speakers or Q&A sessions don't overrun. It's also good to start on time specially if you're live streaming the event. That said, you must also keep in mind that some attendees may be late so allow a few minutes for everybody to show up before starting.

To advertise your meetup is critical to its success. Make sure your communicate it on social media and ask, for example, your speakers to help with spreading the word.

After your event it's also nice to engage with your participants and send a feedback form to help you make the next edition even better!

The big day has arrived! Make sure there is at least another person to help with the organisation. You'll be busy making sure everything is ready and the attendees are feeling welcome. Some support from someone who is up to date with the organisation will provide invaluable help.

That's it! Many other aspects such as using meetup.com, writing a good code of conduct or charging for attendance are not covered in this guide to keep it quick and easy. I hope the points above will decide you to get started with organising your very own meetup. Feel free to leave a comment below if you have more specific questions.

tl;dr: Media capture, object detection and WebGL can be combined to hack a simple augmented reality experience. See my demo called we are all Saints.

To simplify things, augmented reality is based mainly on 2 technologies:

Of course modern AR headsets like Hololens combine both to create the best experience possible. I explored using common devices with web technologies to create a simple AR experience. I decided to go for computer vision applied to media capture. 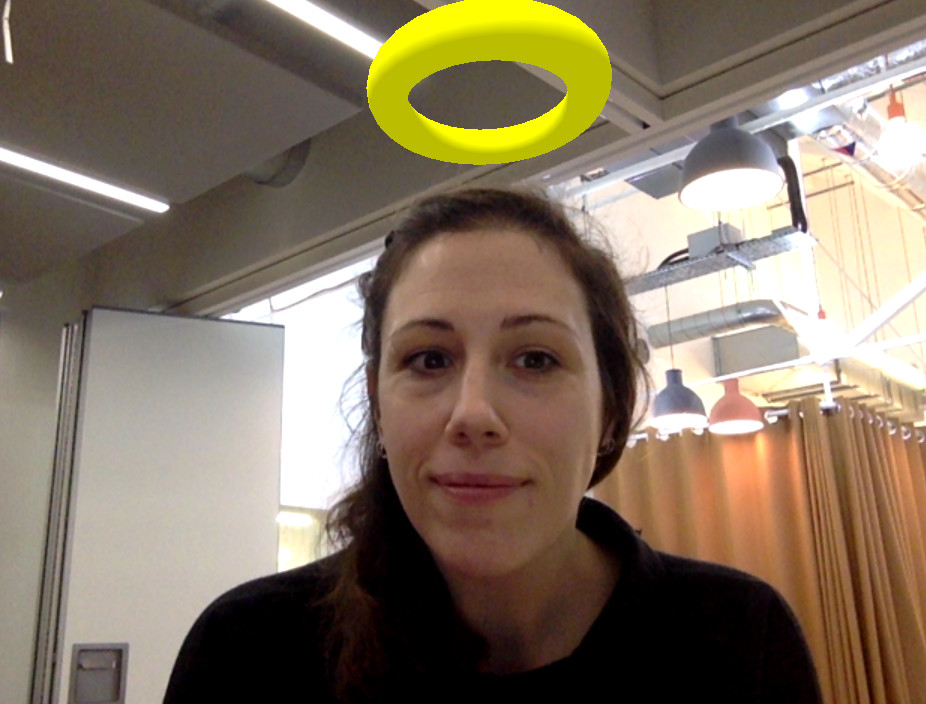 There are few different libraries to detect objects in an image. Most of them seem to be based on OpenCV, ported to JavaScript via emscripten. I didn't spend too much time looking for a library and quickly settled for js-objectdetect. It's hand-written (as opposed to converted via emscripten) so it makes easy to read, understand and debug if needed. It can detect different types of objects but I used human faces here.

Once set up properly, js-objectdetect accepts a video element as an input, so I just pass to it the one that displays the camera feed I got from getUserMedia.

It return the coordinates in pixel of the faces detected (left, top, width and height).

Next step is to place the faces detected in the image in a virtual 3D space by estimating their respective positions. I used A-Frame to create the 3D world because this framework is easy to use.

Positioning an element on the x and y axes is really easy. We need to convert the position in the (-1, 1) range, more about that later. For example a point centred in the image will have both its x and y values set to 0. Knowing the position in pixels and the size of the video the values are easy to get (Also the y axis direction is reverse in the web and WebGL). For the x axis, half the width needs to be added so that the element is horizontally centred on the face.

The z axis is a bit trickier. It needs to get estimated and calibrated. I used the height value. I noticed that once detected my face takes at most 80% of the image height when I stand at about 50cm from the camera. The further I step back, say about 2m, the smaller my face gets, to take about 30% of the screen height.

I used these distances as the values for the camera frustum near and far clipping planes (near and far attributes on the <a-camera> element).

Then I only need to convert and clamp the height of the face detected between the % values of image height that I determined above. Once converted to the (-1, 1) range, they'll vary proportionally between 50cm and 2m. That gives me a good enough approximation of where my face is located in respect to the camera.

I also used the detected height to position the virtual element a few apparent centimetres on top the faces.

A-Frame uses Three.js under the hood. That's what I'm using to perform computations.

Now that I've got the x, y and z position in the (-1, 1) range I need to unproject this vector along the active camera. That is not as complicated as it sounds:

This returns a vector corresponding to the position in space of the object given the current FOV (i.e. camera).

Finally I can set the position of the A-Frame element in the virtual space that I want to super impose over faces:

This experiment wasn't as hard as it sounded at first and the result is quite convincing. I learnt a lot about projection and unprojection in the process. As usual the code is on GitHub as all-saints-ar because we are all saints!

I just finished a short series of experimentations about virtual reality called VR Diary. Here's a brief summary of why and how.

VR, but what for?

Creating content for virtual reality is easy. A-Frame is probably the easiest way to get started. It's entirely free and open-source and only requires a basic of HTML programming. On other projects, I used Google VR SDK for Unity and the graphic UI of Unity allows you to create content without even typing a single line of code.

So now the real question is what are we going to use VR for? VR is just a medium and in itself has no value.

This is what I explored in this project. VR is an immersive and engaging platform so I decided to use it to share personal experiences with the readers.

It took a direction towards philosophical questioning and reality challenging that I hadn't expected. But overall it's been successful from a personal standpoint: the experiments are consistent (except maybe the first one) and I've been able to go through the 6 days.

Working as a hobby

An essential aspect to this experiment is being on holiday with a lot of free time. I dedicated about 2 or 3 hours a day actively working on the VR experiment and writing the post. The rest of the day was spent thinking passively about what to do next.

This liberty was essential to generate new ideas to experiment. Creative people know you can't just sit at a desk and expect to get new ideas. That's when you go out for a walk, sit in the grass, spend some time in a zoo or a museum that you release the most of your creative potential.

I thoroughly enjoy this lifestyle of working actively a few hours in the morning and passively for the rest of the day. Maybe that's how life should be: dedicating most of your time to creativity and self-expression and work only for how long is necessary. This is something I want to explore more in the future.